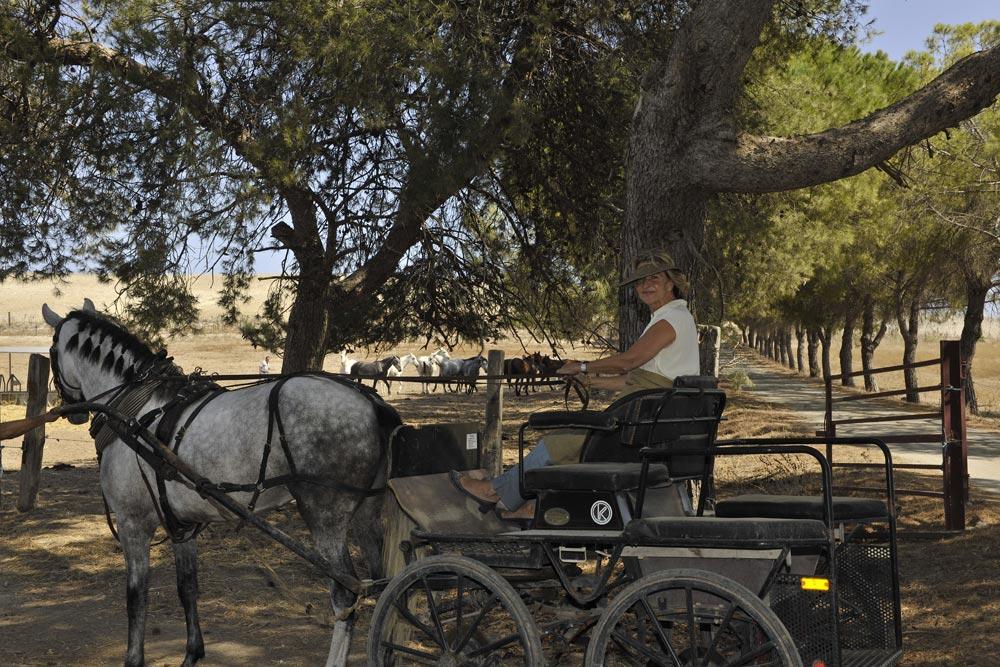 Rocío on the horse carriage, behind her, in the field, her mares.

We leave in the direction of El Cuervo in the early morning, we have a one hour journey ahead of us, the sky is clear, as it often happens in Andalusia. We arrive at the Ganadería Rocío de la Cámara Ysern, where she is waiting for us. Rocío is a refined and elegant woman, she welcomes us with a smile and shows us her wonderful Cortijo de la Sierra. A typical Andalusian structure, with a square patio, surrounded by rooms, as if it were a fortress.
We enter a wide and long lounge, Rocío offers us a coffee prepared by the faithful María, the maid who has worked with her for several years. The horse breeding farm was founded in 1950 by Rocío’s dad, Fernando de la Cámara, three years after having founded the bulls one. Rocío has taken on the company from a very young age shortly after her father’s death.

A mare in her stall

The farm's brand in the bulls arena

The bulls arena with a view on the fields

Tiles depicting bulls and the terrace above the arena

Foals in the field

The mares move to the pasture with the bulls

Rocio's bulls and in the background the mares

Path to the garden

The farm is divided into two parts, at the top the beautiful patron house Cortijo de la Sierra, where horses were kept in the past and where the family lives, a few hundred meters below, we find the stables, the bullring (where the courage and resistance of bulls and cows is tested), the horses’ track and various enclosures for cattle and horses for a total of 1,200 hectares of land.
Today her PRE farm has about thirty units, 6 of which are broodmares and 1 is the house stallion.
She confesses she has greatly reduced the number of animals, focusing on quality and optimizing breed selection. According to Rocío, in this world, what matters is how a mother transmits, even if she is not a champion, but passes on a good genetic she’s a mare that never betrays, as she says “the one you can trust” and that you can be sure he will always produce excellent specimens.
Rocío breeds both through natural mating and artifical insemination, when a mare is in heat, she leaves her free in a field with the house stallion: Cartujano, a wonderful 18 year old PRE with elegant movements. The mothers with their unweaned foals are left free in the pastures along with the house’s 2 year old bulls, the older foals are divided by age in some very spacious enclosures around the stables. Rocío’s breeding philosophy is devoted to the freedom of animals, she explains, “it is essential for the physical development of these animals, but also for their mental health.” In addition, it allows Rocío to save considerably on the cost of food, which is almost entirely self-produced. The market today is suffering a major crisis, it is difficult to sell horses, she says “there is no stopping in this sector, there are no opening or closing times, and one can forget about the weekends.”

Sevillana with her foal son of Lovera's Norte

Foals in their corrals

The stallion Cartujo XII posing in the bulls arena

Foals running in the field

Foals galopping in the field

Rocio's mares in the field

Two broodmares eating in the field with Rocio's bulls

His older 3 and 4-year-old bulls, who are now ready for bullfighting, are separated and locked in spacious fences. The bulls of the Ganadería de la Cámara Ysern are smaller than average, they must have the right amoun of courage, they must be noble and have great elegance when charging. Rocío is a strong woman, an experienced breeder. She is a woman who moves around in a world of men, a woman who has had to be a mother to her three children, carrying on an important and prestigious agricultural activity, she explains “being a woman in this sector is difficult, it is always double the sacrifice and work, it is not easy to get respect in a world of men”. She has earned respect by generating beautiful horses and bulls, we understood it when we saw how her employees, today, 5, are led by their leader, carrying her on the palm of their hand.