The International Monetary Fund and World Bank estimate that three to five per cent of world GDP (USD 1.6 trillion) is laundered every year, a plague since 1973. 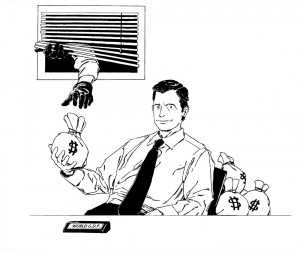 Money laundering, lavado de dinero, blanchiment, riciclaggio–the term was first used in 1973 during the Watergate scandal, and there is no antecedent legal definition to describe what the Financial Action Task Force (FATF) calls the process of disguising the illegal origin of crime proceeds to make them appear legal. The laundering process usually starts with an initial accumulation of illegal capital (“placement”) deriving from activities typical of organized crime: arms sales, smuggling, drug trafficking, tax fraud, insider trading, bribery, and computer fraud schemes. Eventually, the funds are laundered by disguising their sources, changing their form, or transferring them to a place where they are less likely to attract attention (“layering”). Finally, once in the financial system, the funds can be invested in legitimate and quasi-legitimate economic and productive activities (“integration”).

The globalization of the world economy and the concomitant increasing complexity of the global financial system have resulted in a large number of jurisdictions functioning as offshore financial centers. Offshore centers allow businesses to move their income to a foreign jurisdiction with more favorable tax laws and stronger voluntary or statutory privacy provisions compared to where the investor resides. In practice this means: greater privacy and secrecy, lower taxation (thus the term tax haven), easier access to deposits, and less regulation. These advantages are attractive not only to legitimate customers but also to money launderers who choose offshore centers that offer adequate financial and business infrastructure and, at the same time, strict banking and financial confidentiality facilitated by a general lack of transparency. In addition, some jurisdictions still apply bank secrecy so that authorities cannot access personal and bank information unless certain conditions apply. Bank secrecy is still prevalent in certain countries such as Luxembourg, Singapore, Lebanon, as well as at offshore banks and other tax havens where extreme client anonymity and discretion are guaranteed. Switzerland, the country that historically has played a leading role in bank secrecy, has been under intense pressure to find a way to allow its banks to share information with foreign authorities so as to avoid potential legal action. (UBS settled tax evasion claims with U.S. authorities in 2009 at a cost of $780 million.) Luxembourg announced in April that it would begin sharing information about depositors’ accounts in 2015, just two days after fellow hold-out Austria signaled it would enter EU negotiations to do the same.

It is clear that ML profits hugely from the exploitation of offshore jurisdictions and strong banking confidentiality laws adopted by some countries. That is why European regulators have been fiercely trying to erode this privilege by implementing anti-money laundering regulations for banks and financial intermediaries to protect the integrity and stability of the international financial system and make it more difficult for those engaged in crime to profit from their criminal activities. Three European directives were issued, and there are currently talks on issuing a fourth Anti-Money Laundering Directive. Will the legislators be able to promote transparency and accessibility of beneficial ownership information to chip away at criminals profits?

HOW TO BE ON THE SAFE SIDE OF THE ROAD

Current EU legislation, known as the Third Anti-Money Laundering Directive, has been in force since 2005 and applies to banks as well as to lawyers, notaries, accountants, real estate agents, casinos, and company service providers. These recipients are required to:

WHO FAILED TO COMPLY?

Failure to comply with AML laws and regulations and breaching financial sanctions can have serious consequences, such as:

Some famous cases in the past are:

The US Hunting Tax Evaders