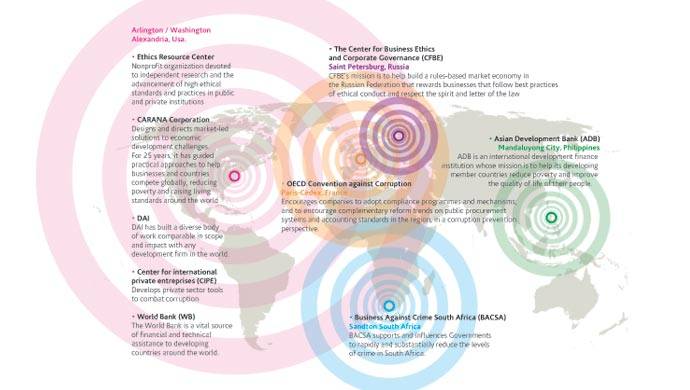 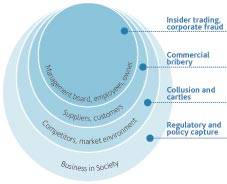 twsm Which are the main situations of corruption in the corporate world?
fr There are primarily two main situations of corruption which occur in the corporate world. The first is the interaction between businesses and governments, which has always been the main area of corruption. In this field, corruption is done by people who have money but with no decision power in their interaction with people who do not have money but have the decision power. Transparency International reveals which business and government sectors are more exposed or prone to paying bribes, through hallmark measuring tools such as various Indexes. The second situation of corruption occurring in the corporate world is private corruption between two firms. In this case, firms take an advantage for themselves to the detri ment of others – their own employees throughout the supply chain, competitor firms, or other actors. An example would be the ‘classic bribe’ being paid to a purchaser, or the abuse of insider trading privileges. In the private field, a rarely explored situation of corruption occurs with mergers and acquisitions. Corruption can occur when someone is on both sides of the transaction, for example being the buyer and the seller. An example is when a Chief Financial Officer negotiates the sale of a subsidiary to an entity of which he is a hidden shareholder.

twsm Are there company protocols which deal with avoiding corruption? If yes, which are they?
fr There are several company protocols aimed at preventing corrupt practices, called ‘anti-corruption programs’ or ‘compliance programs’. While many multinational corporations have these programs in place and they are more or less enforced, it can be difficult for a company to ensure correct implementation, especially a larger company

with a lot of foreign subsidiaries. Two important company processes are worth mentioning. Firstly, ‘whistle-blowing procedures’ must be enforced and made available to employees. Employees must be able to bypass their direct supervisor or management on a confidential basis in order to report any concern. A second process implemented by companies is the management of 3rd party agents. Corruption is now channeled many times through these agents. While it is easy to hire an agent, it must be known what this agent is doing on your company’s behalf.

twsm Basically, which type of corruption occurs in companies – money, blackmail, or other?
fr Blackmail may be a consequence of preexisting corruption. It is interesting to mention that these payments exist as ‘petty corruption’, regarding only a few dollars or hundreds of dollars with poor people, or by companies as ‘grand corruption schemes’, typically involving millions of dollars. In the corporate world, cash is given to people by electronic money wires from one off-shore account to another off-shore account, those accounts being often operated by trusts. Disguise then comes in two forms: the account disguises the flow of money and the trust disguises the identity of the company. These ‘grand corruption schemes’ are normally very complex, since several countries are involved. To fight this corruption, we must advocate for better international co-operation.

twsm So in the fight against corruption, not only local and national governments must be involved but also organizations such as the United Nations?

fr You rightly mention the UN since there is a UN Convention against corruption which has been signed by 140 countries worldwide, so most of the countries are involved. This convention is very detailed, with precise provisions for investigative and judiciary action. However, the adequate implementation of this convention is still very weak and slow. 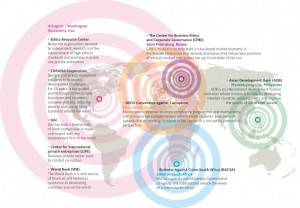 twsm Is it possible to classify the different kinds of corruption found in different countries? If yes, which are they?
fr It is difficult to classify corruption in different countries because it depends on the country. With petty corruption, it especially depends on how the local government and civil authorities act. With grand corruption schemes, the corruption is enhanced by the global scale and interconnected nature of the economy. It is important also to understand that developing countries are often resource rich and international corporations are operating and headquartered elsewhere, creating situations for more corruption. The developing country is therefore the victim of corruption and the external country is where the bribing originates. Overall, most countries cooperate with anticorruption laws, but strong enforcement is only done in a few countries. The governments of the U.S. and Germany hand out significant fines to any company which commits corruption; which is a good start. But it is still not enough. Both governments and companies must be involved in the fight against corruption, as ‘it takes two to tango’. Private sector development has become a central feature of the development strategies of many actors. From 2004 the UN Global Compact (both a policy platform and a practical framework for companies that are committed to sustainability and responsible business practices), seeks to align business operations and strategies with ten universally accepted principles in the areas of human rights, labour, environment and anti-corruption and to catalyze actions in support of broader UN goals. With over 7,000 signatories in more than 135 countries, it is the world’s largest voluntary corporate responsibility initiative.

The New Renaissance of the Chateaux